Pip Hare proved herself a natural communicator in the 2020/21 Vendée Globe. Here she takes us onboard her boat Medallia to show what it’s like and what she wants from a boat in the future

Now back safely on dry land having completed her first ever Vendée Globe race, British sailor, Pip Hare, takes a camera onboard her boat, Medallia, to show us around and remember the highs and lows of the race.

The Vendée Globe is a unique event and is loved by sailing fans the world over for a variety of reasons. Winning the Vendée Globe is rightly seen as one of the pinnacle sporting achievements in the world of sailing, but so tough is the non-stop, solo, unassisted round-the-world race, that merely getting to the finish line is a remarkable achievement in and of itself.

So tough is racing around the world solo, non-stop and unassisted that is remains a feat achieved by fewer people in history than have been into space. This goes some way to showing how exclusive the club of Vendée finishers is.

That so few people have managed to achieve the goal of finishing a race – which is sailed once every four years and often sees over half the fleet of 30 boats fail to see the finish line – should help those unfamiliar with the race to understand why it is that for the fans, despite the Vendée being a race, the stories of those who finish are held just as dear and celebrated just as much as those who win or secure a podium position. 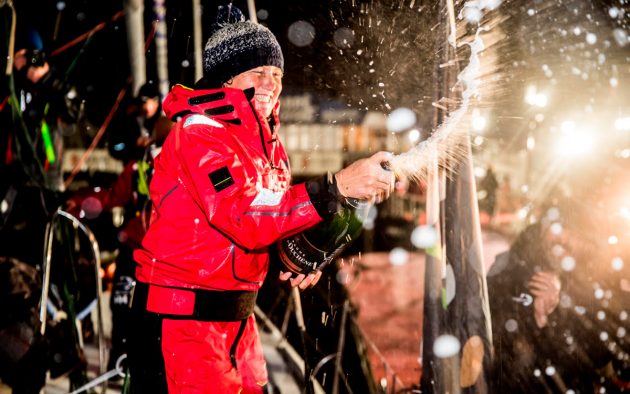 Pip Hare celebrates with Champagne after arriving back on the dock at Les Sables d’Olonne. Photo Richard Langdon / Ocean Images

In recent editions of the race, as technology has improved the have been able to post updates about how their race is going, record audio and video from their boats in some of the most remote parts of the world and generally offer those of us ashore some insight into just how big of a toll this race can have on the sailors.

As such there are often a number of gifted communicators who are able to provide a sense of the soaring highs and crashing lows that accompany the c.80 day voyage around the world. Without doubt one of the sailors who truly captured the public’s imagination in the 2020/2021 Vendée Globe was British sailor, Pip Hare.

Pip’s struggle to even make the startline of the race as she tried to find funding to fulfil her dream of sailing in a Vendée has been enthralling. Her many generations old boat was never likely to trouble the top step of the podium, but if she could make it round and sail well, she would increase the chance of securing increased backing in the future and hopefully arrive at the startline for the next Vendée Globe with a much more competitive package.

Pip sailed an incredibly impressive race to finish this edition of the Vendée Globe in 19th position despite a raft of difficulties throughout the race, including replacing a broken rudder in the Southern Ocean.