Loic Escoffier has been rescued after capsizing in his ORC 50 south of Fastnet Rock – his brother Kevin Escoffier received the alert.

Loic Escoffier has been rescued off the coast of Ireland after capsizing in his ORC 50 while racing solo in the Drheam Cup.

Loic Escoffier, who is the brother of Vendée Globe skipper Kevin Escoffier , was competing in the single-handed 1,000-mile race when he sent a message at 1640 yesterday (Tuesday 19 July) to raise the alert that he had capsized about 60 miles south of Fastnet Rock. His brother Kevin (who was himself famously rescued in the solo Vendée Globe race), received the message.

Escoffier was sailing in 30-knot winds when the catamaran capsized, and he was leading the four-boat Rhum Multi fleet at the time. His sponsors Lodigroup reported that Loïc was fine and safely inside the boat. Race management alerted the nearest competitors to Escoffier’s position and search and rescue services. 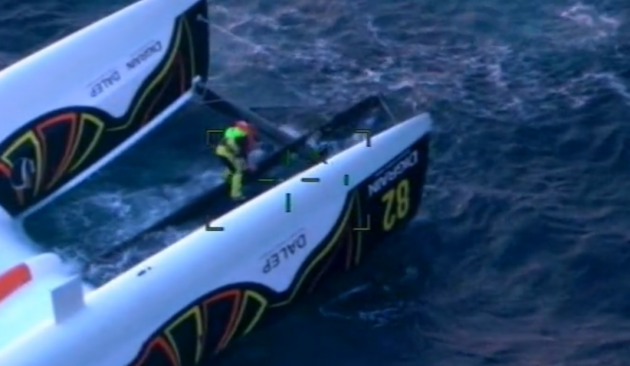 Approximately six hours after the incident, at 2200, the Irish Coastguard and Baltimore RNLI rescued Escoffier from the upturned vessel. Video footage shows the challenging sea state at the time, as Escoffier was first recovered by RIB from the forward trampoline and transferred to Baltimore Lifeboat.

Shortly before midnight Escoffier was then airlifted by helicopter and transferred to Cork University Hospital. 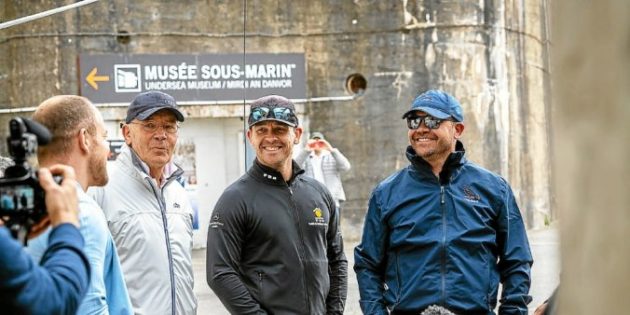 Loïc Escoffier (right) with his brother Kevin (second from right) and their father Franck-Yves, himself a winner of the Route du Rhum, at the boat’s launch. Photo: Lodigroup/PolaRyse.

The Irish Coastguard issued a statement saying: “Valentia Coast Guard in collaboration with French and UK SAR authorities coordinated a response to an incident involving a single person crewed racing catamaran approximately 70 miles South West of Mizen Head late yesterday evening. As part of the rescue operation the Coast Guard Helicopters from Shannon and Waterford and Baltimore lifeboat were tasked to the scene.

“Just after 10pm yesterday the Casualty was recovered from the upturned catamaran by Baltimore RNLI lifeboat and then airlifted by Waterford helicopter R117 from the scene. The Catamaran is understood to have suffered damage to its keel and overturned. Just before midnight R117 transferred the sailor to Cork University Hospital. The skipper is understood to be in good spirits after his ordeal.”

Divisional Controller at Valentia John Draper added: “The recovery was more challenging than we might have initially expected and I want to compliment both the Baltimore RNLI crew and the Helicopter crews for their professionalism.” 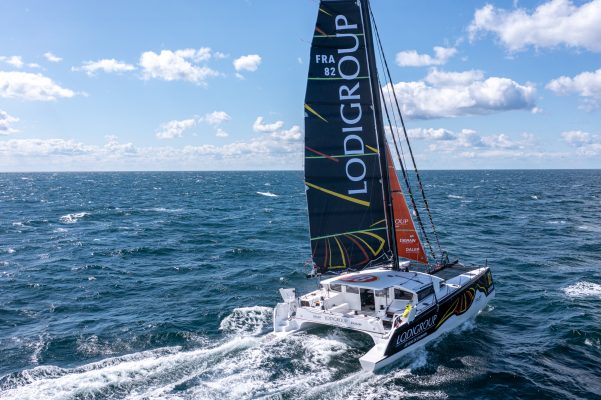 Lodi group also issued a statement on their social media pages saying: “Shortly before midnight, Tuesday 19 July, almost seven hours after his rollover occurred off the Fastnet, Loïc Escoffier was rescued by the Irish Coast Guards. The skipper is fine and uninjured.

“The whole LODIGROUP Team warmly thanks Brieuc Maisonneuve, Rhum Multi competitor, who stayed near Loïc until his evacuation, as well as the race management and rescue teams for their reactivity and professionalism.”

The Drheam Cup is a 1,000-mile race which takes the solo fleets from Cherbourg, past Lizard Point to Fastnet Rock, then to a turning mark off the Ile de Ré and the Vendée, before finishing at Trinité-sur-Mer. The fleet includes Class 40s, Ocean 50s, Figaro and IRC designs as well as performance multihulls.

Escoffier’s Lodigroup is an ORC 50 catamaran (formerly known as the TS5) launched in March this year. He had competed in several crewed races with the boat this season but this was his first solo race in the multihull.