When it does, proximity to land and other boats usually means that some external help is at hand.

But the possibility that you lose the rig and have to deal with the ensuing situation alone is always there.

I was sailing Saga, a 30-year-old Beneteau First 36.5, with her owners Thomas and Astrid, from Gotland back to mainland Sweden, a distance of 70 miles.

Her mast and standing rigging had been professionally inspected two years previously, her sails and running rigging were mostly new, and everything appeared sound.

We put in a first reef with a breeze of 14 knots and the second at 17 knots and were making 6.7 knots close-hauled in a relatively lumpy sea with waves around 1-1.5m high.

Thomas, Astrid and Saga safe and sound in Nynäshamn, following the dismasting

After sailing six hours – about 40miles – we decided to put in a tack.

As we came through the wind there was an almighty crack.

The mast vanished, the main boom slammed onto the spray-hood over the cockpit, and a second later a look forward revealed only a short section of mast, unstepped from its housing inboard and sheared off outboard, projecting horizontally out over the starboard lifelines.

The other 13.5m (45ft) of the rig hung vertically from the outboard end of this stub, the jagged end of the broken-off mast extrusion vanishing into the sea with each downward roll of the boat.

On the bright side, no one was injured; on the down side, we were outside the range of the excellent Swedish 4G network, and the radio – whose aerial was located, you guessed it, at the top of the mast – was dead.

Should we sit and wait for help arriving on the off chance, or should we try to get ourselves home?

We were not in a shipping lane or on the popular direct course between Visby and Landsort (we had been beating towards our destination).

We had no emergency sender on board and it would take a couple of days before relatives realised we were missing.

We didn’t like the look of the sheared-off section of mast pumping up and down out of the water inches from the boat’s waterline.

And the sea conditions were increasingly uncomfortable.

Waiting seemed like a bad option, so we planned for clearing the boat of the rig in order to motor home. 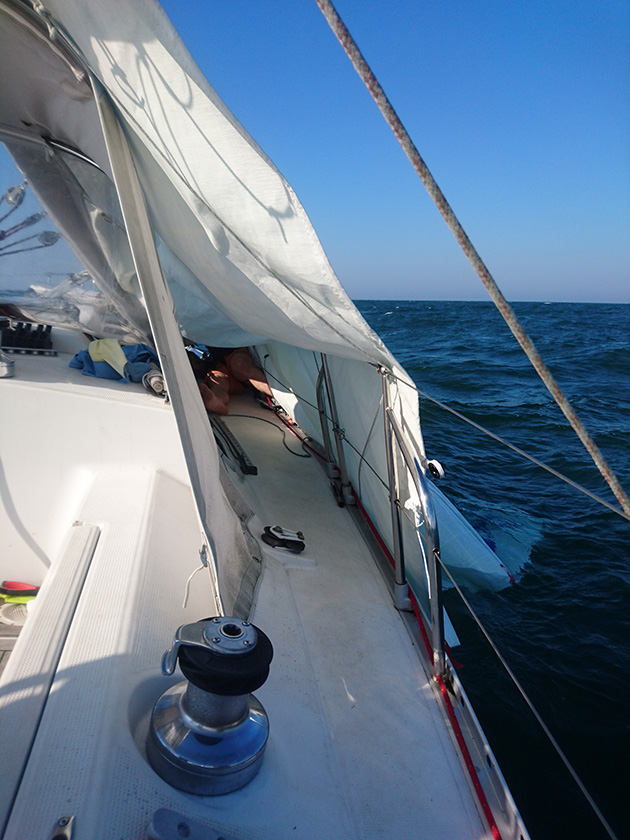 We started with all the loose-running rigging that wasn’t under load.

The halyards for the jib, spinnaker and gennaker, and the reefing lines for the first and second slab reefs in the mainsail were cast off from their jammers at the front end of the cockpit and pulled through all the blocks on the way to forward to the mast.

We coiled each halyard in a neat harbour stow to avoid the risk of floating ropes tangling in the propeller later.

We took off the jib sheets leaving the main halyard, the kicking strap and the main-sheet.

Next we dealt with the stays.

This boat had an adjustable backstay so we cast off the runner, which was a continuous line attached to a wire purchase.

The wire-splice at the end of the backstay proper wouldn’t pass through the pulley system, so we removed the pins of the pulleys and jettisoned the pulley wheels.

We did the same operation on the forestay, attached to the boat by a shackle beneath the roller-jib furling gear.

All this went relatively smoothly and took perhaps 30 minutes.

Disconnecting the shrouds, on the other hand, was a different story.

A First 36.5, like many boats the same size, has a fractional rig, with two sets of spreaders and two powerful shrouds fixed down to the deck on either side amidships.

Taking them off took approximately two- and-a-half of the four hours that elapsed in total between 1500 when we lost the rig and 1900 when we were clear, with the engine started and heading for home.

It doesn’t get easier

We began working on the port side, the mast having fallen to starboard.

The main shroud was still intact, its 10mm rod bowed over the cabin top, disappearing over the sail down into the water; its lower threaded lug bent as it entered the rigging screw.

Two crew were needed to release it – one turning the rigging screw using the arm of a thin spanner, and one stopping the shroud turning with an adjustable spanner.

The boat lay exactly beam-on to the swell, anchored by the rig amidships, and she corkscrewed as the seas ran under her.

As she rolled the whole assembly of mast and rigging moved, and the stress in the shroud, and the resulting friction in the rigging screw, changed, jamming the increasingly misaligned screw in the lug on the deck.

Once it was free we cast the shroud over the cabin top and began work on the rigging screws on the starboard side.

The starboard shrouds were buried under the mainsail and the broken off, mobile section of mast.

Removing them meant crawling under both and had to be done single-handed. 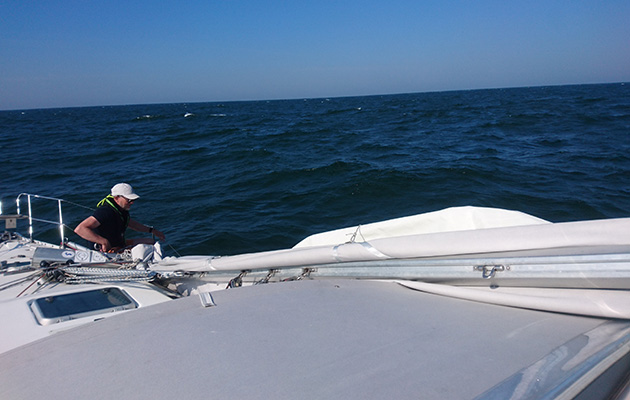 Tim Ainsworth Anstey grew up sailing out of Lymington on the south coast where his father worked for the yacht designers Laurent Giles and Partners. He now lives in Stockholm, Sweden, and summer cruises in the Stockholm archipelago and the Baltic

The threaded lugs housing the rigging screws were badly bent like those to port, and turning them needed one hand to hold the adjustable spanner, to prevent the shroud rod from turning, and the other to yank the rigging screw around using the using the arm of the spanner.

This had to be done hands-above-head, stretched out fully on the side deck.

The rolling of the boat was disorientating and the work hard to see: imagine a body-pump class on a roller coaster under a collapsed tent, and you are somewhere near the experience.

But eventually the work was done and we now had a rig fixed to the boat only by the remaining running rigging.

We removed all of it bar the main halyard, which now took the entire load of mast, sail and rigging as they moved up and down in the water.

When we tried to slide the broken bottom section of the mast outboard over the starboard lifeline we realised how heavy that assembly was.

Nothing would budge; the mast was jammed on by a tangle of rope and to get it clear the lifeline would have to come off.

We were tired; hands cramped; and the load of the mast meant that the thread of rigging screw connecting the lifeline to the pulpit was as difficult to turn as those at the shrouds.

Eventually, after perhaps 15 minutes of struggle, the lifeline stripped the last section of thread out of the rigging screw and sprang clear, letting the mast down on the toe rail with a bang.

After this, one of us tailed on the main halyard and the two other crew lifted the mast on a wave to get a jammed cleat off the rail.

From the moment the mast had broken until we were home totalled a nine-and-a-half hour journey under engine across a frisky Baltic.

By 0500 the following day we were berthed at our intended destination, rolling into our bunks for some sleep.

Thomas, the owner, slept little, however, nagged by questions about how he’d dealt with the situation.

No one had been injured, but what if they had been? Were they right to dump the rig? And what on earth were the insurance company going to say?

Regarding the last question, in Sweden, at least, the insurers took the claim, no question.

To save the rig would have entailed more risk to the crew, and in any prioritisation, the safety of the crew rates first.

In relation to the other questions, having come through the experience our advice would be:

The post ‘We let go and the entire rig sank like a stone’ appeared first on Yachting Monthly.