Meteorologist and all-round weather guru, Chris Tibbs explains weather forecast accuracy and details the reasons they can often be wrong

Weather forecast accuracy will always be a hot topic of debate. As a forecaster I’ve seen the accuracy of models improve greatly over the last couple of decades, but so too has what sailors expect. Gone are the days when the shipping forecast was pretty much our only source of weather information. An explosion in the amount of information available online means it’s easy to keep looking at forecasts until we find one that we like!

The profusion of weather forecasts in GRIB file format makes life easier in one respect – but more difficult in another. We can very easily see a forecast wind field and get an idea of gusts, rain and a whole host of other details, but we must also appreciate what it is telling us and what it is not.

Although for many of us looking online to see what wind is expected is all the forecasting that we do, that misses out on a lot of detail we would get in a properly prepared forecast.

For example, a GRIB file gives a specific wind value but we all know that the wind is rarely steady in speed or direction – even over a small area when dinghy racing, it’s the boats that get in phase with wind shifts that will win. Extend this to a larger scale when on a passage, and the wind may be very different between one side of a headland and the other, but GRIB files are likely to miss this unless they are very high resolution.

What weather forecasts tell you

So, what are we looking at? Computer models forecast for the whole world – these are called global models and vary in resolution from about 0.25 of a degree to 0.5 of a degree or more. These are pretty accurate over the short term, particularly away from land. 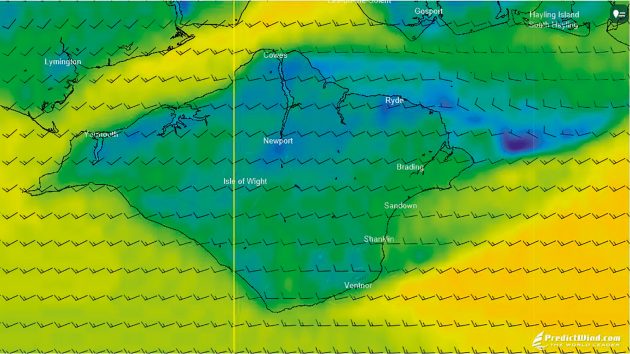 An example of a hi-res GRIB from PredictWind. When reading a GRIB file it’s important to understand what it is not telling you just as much as what it is. Photo: Chris Tibbs/PredictWind

When conditions are stable the forecast may be good for a week or longer. When depressions are rattling across the Atlantic, for example, forecasts will be less accurate in the detail although they will give a good indication of the pattern.

Global models are the ones we use crossing oceans, but they become less accurate when sailing along the coast where the interaction between the atmosphere and land is so important. Take one variable, temperature: over the land the temperature may rise 10°C or more from the dawn minimum to the mid-afternoon maximum. But at sea the air temperature variation is only 1° or at most 2°.

Sailing by the coast we often see clouds building over the land as it heats through the day. While this may indicate the development of a sea breeze, it also indicates instability and turbulence. With rapidly heating land adding instability into the atmosphere, combined with the turbulence caused by wind blowing around headlands and the drag as wind crosses the land, it’s easy to understand why the wind is so variable along the coast. 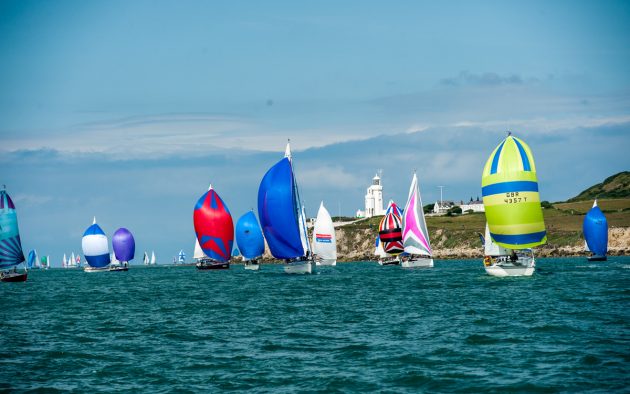 Headlands and other topographic features can have a significant effect on wind, that high-res GRIB files may not always pick up.

This is why we need higher resolution models that can take into account the variations of land temperature and the effect on the wind. How good these high-resolution models are depends on how much information is fed into the models. Not only where the coast is, but also its height and the geology of the land – rocky hills will heat and cool quickly, as will cities and towns, while heavily vegetated areas will heat more slowly.

Adding all this extra information into models means that running high resolution models is expensive and there’ll be a cost for the user.

Wind forecasts are for a standard 10m height; at 10m the effect of the surface plays a big part causing drag which slows and backs the wind (veers in the Southern Hemisphere). Any tall mast will read a greater wind speed than that felt at 10m or deck level, but as the relationship between wind speed and height is not fixed – but depends on the stability of the atmosphere – a certain amount of estimation is involved.

The most extreme case I have experienced was sailing on the Baltic in very cold water. This cooled the air and made it very stable at low levels; it felt calm at deck level yet the anemometer at the masthead at 25m was reading 15 knots.

Forecasts tell us an average not a maximum. On a ‘normal’ day gusts are likely to be around a one third greater than the average. Some forecasts will warn of gusts half as much again as the average. 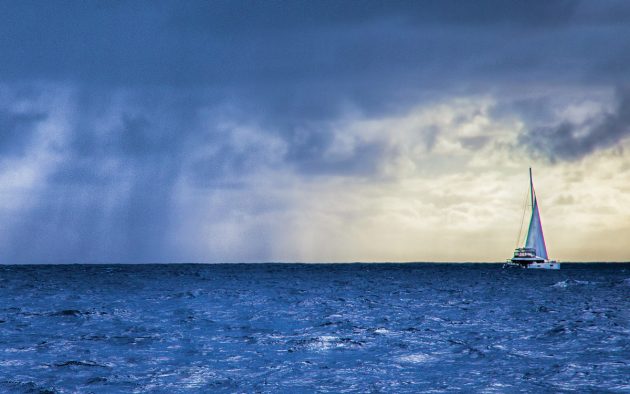 A catamaran on the ARC rally reefed for an approaching squall. Photo: Paul Laurie/Point Photography

A squall is a longer increase in wind and usually associated with precipitation. As these are generally associated with showers and thunderstorms they are unlikely to be picked up in a forecast for a specific area. We sometimes get a percentage chance of showers in a forecast; this helps give a general impression but does not tell you whether you will actually see a squall. Boats sailing just a few miles apart can experience quite different conditions.

GRIB files may indicate 20 knots of wind but in reality we will get some gusts and lulls; this could easily give gusts into the mid-20s and a small squall could increase the top end of the wind range further, while a thunderstorm could produce squalls of gale force intensity.

There has also been a profusion of spot forecasts on various apps. These can be good for general weather but for wind forecasts they’re not so accurate as they will also be greatly affected by land features. While giving a flavour for the weather they are not as useful as a marine forecast as other sources.

To generate an accurate forecast needs time and a certain amount of knowledge. The more time we spend adding value to them the more accurate they become. Most apps are purely computer generated and they are not a substitute to a marine forecast which will cover additional variables, for example visibility which can be hard to forecast from limited information.

The post Weather forecast accuracy – how much can you really trust a forecast? appeared first on Yachting World.