Romain Pilliard’s Use it Again! trimaran runs aground while storm-bound in Patagonia during a westabout round the world record attempt 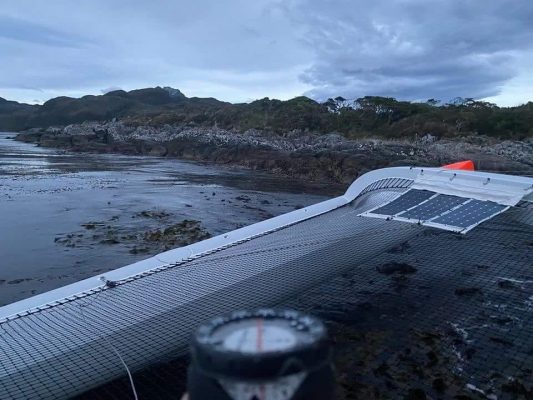 The 75ft trimaran Use it Again! hard aground on the rocks

Two skippers attempting an around the world record attempt against the prevailing winds and currents have run aground in the Patagonian channels, having taken shelter from a storm after rounding Cape Horn.

Romain Pilliard and Alex Pella are attempting to break the ‘world’s toughest sailing record’, a non-stop circumnavigation from east to west, in the trimaran Use It Again!. The 75ft Nigel Irens design was originally Ellen MacArthur’s B&Q.

The team’s social media channels reported that at 0500 GMT (0100am local) this morning, the trimaran ran aground in Cook Bay. The report continues: ‘The skippers are not injured, they have put on their survival suits and are safe. The trimaran is immobilised on the rocks but [is not floating] at the moment.”

Later this morning Pilliard gave his update on the incident: “It was 1 am local time when a loud noise woke me up. The boat came to a stop. I immediately understood…

“We [had been taking] turns at the helm, securing our respective quarters, sailing in Cook’s Bay overnight to be in place on February 9 for a new depression and ready for a possible window exit on the 10th towards the Pacific. The weather conditions were still good, we were under reduced sail, we were progressing at 6 knots in Cook’s Bay.

“Alex was on watch, and it was my turn to rest. After more than a month at sea, fatigue has accumulated and Alex has settled inside and fell asleep. This is an actual nightmare! I don’t really have the words. I am devastated.

“I am trying to focus on the urgency of the moment. But I can’t believe what happened to us. At this moment. In these conditions.

“The trimaran is literally resting on the rocks, we are stuck in a mouse hole with rocks all around us. It’s surreal to be here. To live this. After what we’ve been through the past few days.

“We’ve prepared the boat to get out of here, sent a video to the Chilean Navy so that they can get us out of there in the best conditions and as quickly as possible before the arrival of the depression and without damaging the boat too much. The area is not mapped, so the exit will be complicated. We are not injured, we are going to get the boat out of there, get it to safety, the rest we will see.”

The pair have endured a series of challenges while attempting to round Cape Horn. By 30 January, 25 days after setting off, they had reached Tierra del Fuego. However, with winds consistently above 40 knots, gusting up to 53, they took shelter in the lee of Isla de los Estados in the Lemaire Strait rather than attempt a rounding. 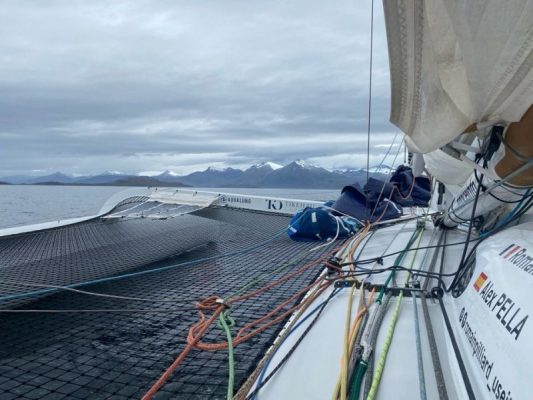 Use it Again! Taking shelter in Tierra del Fuego

Skipper Romain Pilliard reported from onboard: “We have 40 knots, we’re sailing under three reefs in the mainsail and no headsails.

“This is the south. I’m in my 50s, I think I’m going through something crazy. We are finally going to shelter after Lemaire Strait. It is 0 degrees. I put all the thick clothes I can and still feel like I’m skiing without gloves on a crappy weather day.”

The duo made some slow progress for two days, sailing under 10 knots under bare poles while tucked close to the coast, but then had to wait for a second storm to pass. There were also concerns about the risks of sailing upwind into the severe sea state that was expected after the front’s passage.

After 36 hours of waiting, they finally passed Cape Horn on 3 February in extreme conditions, with 30-40 knot headwinds, rough seas, and freezing temperatures. 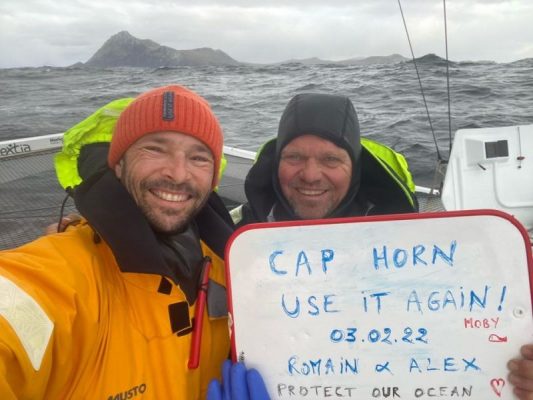 However, even after rounding the Cape, there was no let-up in conditions for Use It Again!. The team’s weather router, Christian Dumard, forecast a Force 7-8 storm in the South Pacific and the team opted to shelter in Cook Bay, at the entrance to the Beagle Channel in western Chile on February 4. 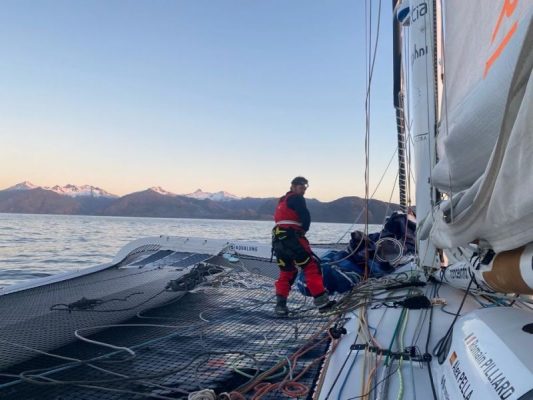 The double-handed team have been manoeuvring constantly whilst taking shelter in Patagonian channels Photos: Use it Again!

Unable to anchor or motor, the pair have been manoeuvring the 75ft trimaran under sail constantly in poorly charted Patagonian channels with highly changeable wind conditions that have varied from flat calm to sudden gusts rising from 10 to 50 knots. The trimaran has also suffered a broken batten and batten car in the process.

The 34,000-mile ‘wrong way’ non-stop round the world course against prevailing winds and currents is one of the toughest challenges in sailing. It has been set as a solo record only five times since 1971, with the current time to beat standing since Jean-Luc Van Den Heede completed it in 122 days in 2000. 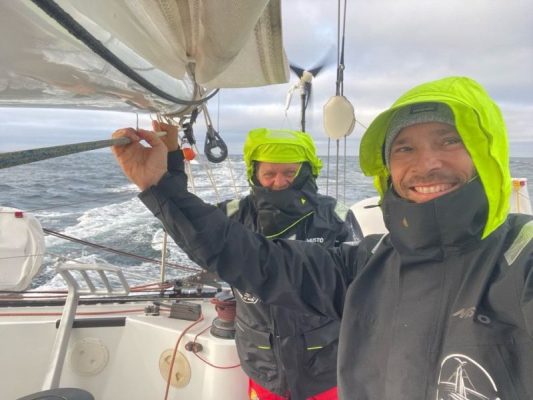 Spanish co-skipper Alex Pella (left) with project creator and skipper Romain Pilliard (right) on the refitted trimaran Use it Again!

French sailor Romain Pilliard, a Figaro racer and IMOCA crew, teamed up with Spanish co-skipper Alex Pella, who set the Jules Verne record with Francis Joyon in 2017 and has raced on IMOCAs, Ultims and Multi 50s. Their objective is not only to set a new record, but to do so on as sustainable a platform as possible, having refit the 2005-designed trimaran and used many recycled components.

Find out more at useitagain.earth

The post Westabout round the world record attempts on rocks off Cape Horn appeared first on Yachting World.