To the usual list of concerns facing transatlantic sailors – too much wind, too little wind, gear failure – a new one must be added: seaweed. Specifically, sargassum. Sam Fortescue reports

Sargassum’s yellowish-brown straggles in the water have traditionally been considered a sign that boats are nearing the tropics, but record blooms of the weed in recent years have created a vast raft straddling the Atlantic, dubbed the Great Atlantic Sargassum Belt.

The first mass bloom was seen in 2011, while the record bloom recorded in 2018 was ten times bigger – sargassum is an increasing problem. Reports by participants of the ARC transatlantic rally suggest that the weed can be a real nuisance on the crossing. 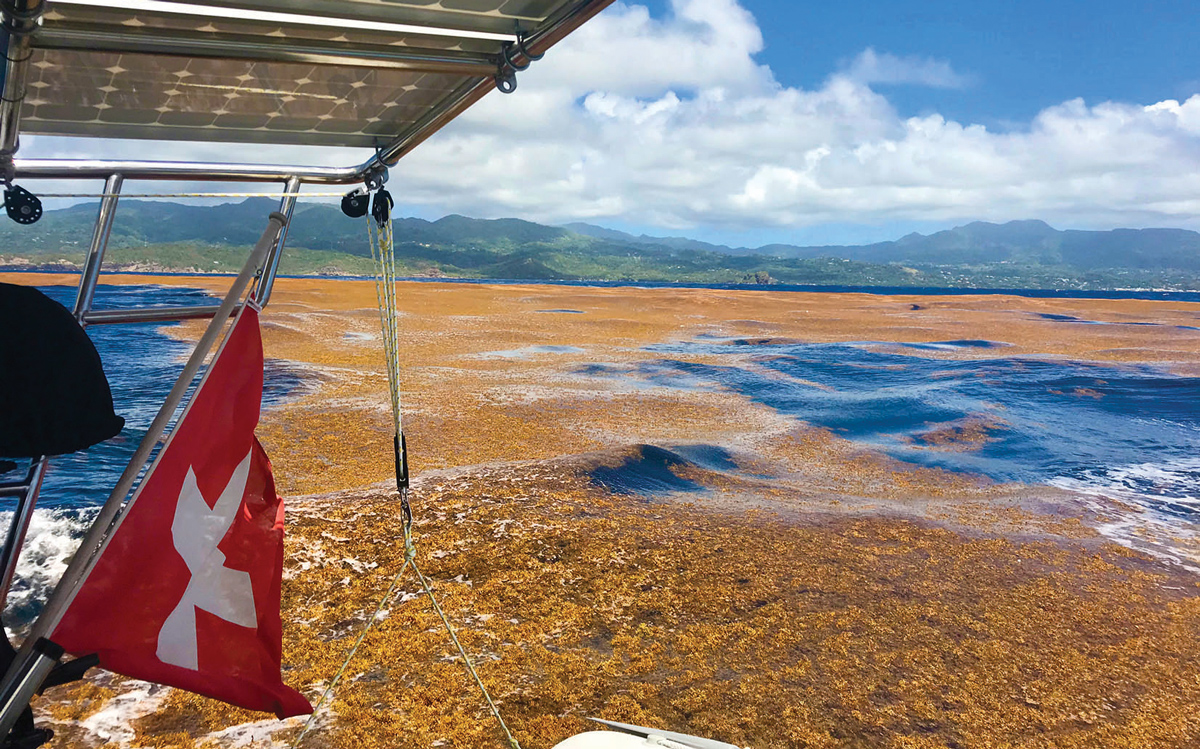 At times of peak bloom the sargassum belt can stretch for thousands of miles. Photo: Marc Locher / WCC

“The thicker clumps slowed down the sailing boat significantly,” explains Marc Locher, who sailed the ARC in a Hanse 505 in 2017. “I was scared that we would be stopped and unable to move on, presuming that the weed would be also under the hull and around the propeller. I had heard that huge carpets of weed could be compressed to a depth of 2-3m.”

Dave Moring ran into sargassum weed problems in the second half of his 2018 ARC+, which sails to St Lucia via the Cape Verde islands. “You can avoid it during the day by slaloming between the fields,” he says. “However, we sailed through one field of sargassum weed on purpose, and that was not one of my best ideas. The speed went down from 6 knots to just 1.5 knots at the end of the field. We could not steer or turn on the engine, we almost got stuck.”

The biggest problem is caused by weed snagging on spade rudders and bulb keels and creating drag. “We had to clean our rudder every two or three hours because the boat would lose speed and steering was impossible because of the vibration,” says Miguel Netto d’Almeida, who crossed in 2018 on a Pogo 12.50. 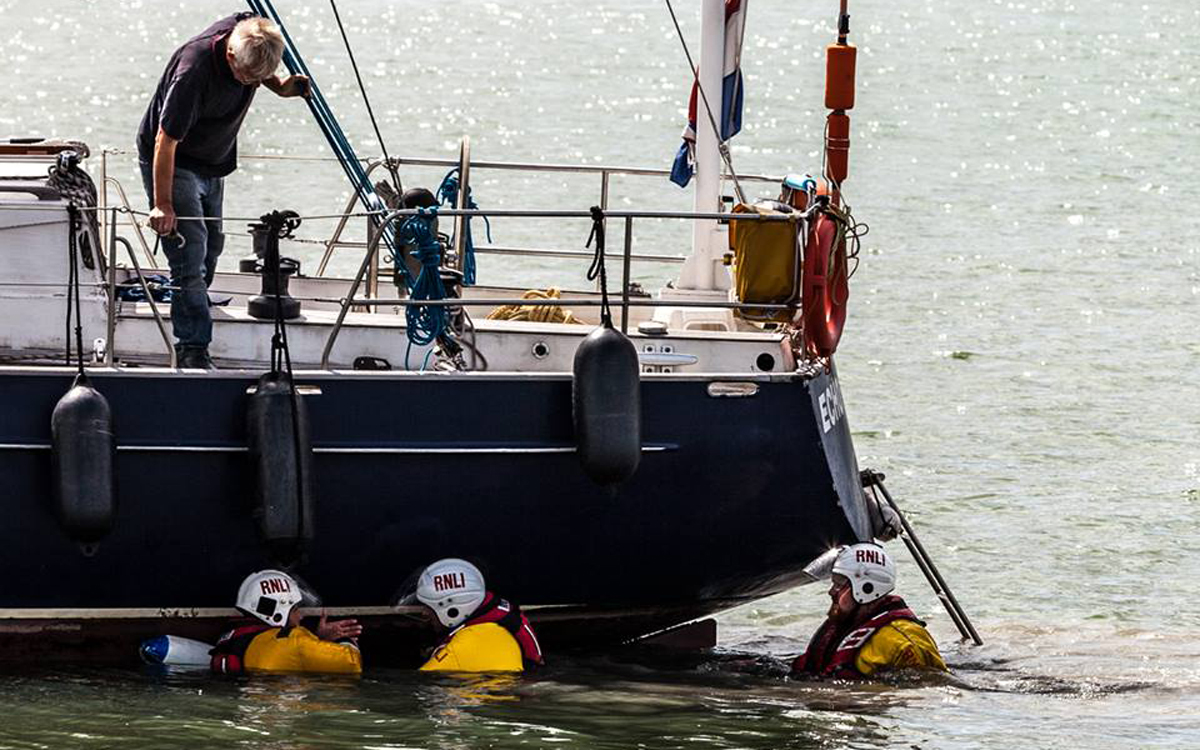 Whether it’s a fishing pot, long tendrils of Sargasso weed or your own spinnaker sheets, getting stuff wrapped around keels,… 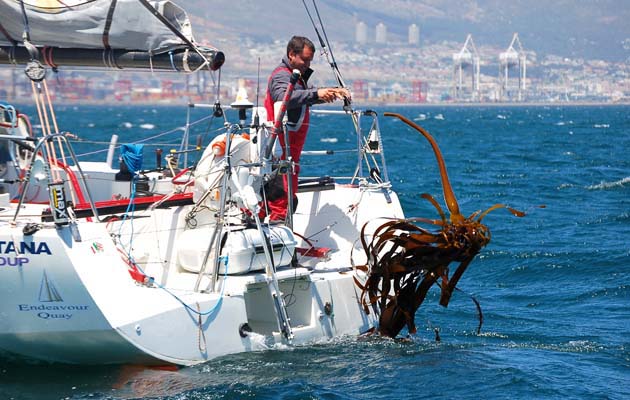 The sails look great and you’ve just spent money on having the keel faired and the bottom sprayed, but today…

Frequent ARC participant Ross Applebey has added weed prevention to his Oyster 48 Scarlet Oyster. “We have fitted a little blade that sits almost touching the rudder’s leading edge that blocks the gap between hull and rudder. This seems to help a lot.”

For many skippers the first sign of weed was a drop in boat speed. While it could usually be shaken off with a few quick turns of the wheel, others had to dive to clear the propeller, or reverse their yacht to dislodge it.

Jörgen Wennberg was alerted to the problem by an alarming vibration as they sailed downwind on an Elan 410 during the 2014 ARC. “[Our] first check was the keel fitting on the inside. That looked solid, fixed to the hull. Next we looked at the rudder fitting to see if the vibrations came from the rudder stock – it looked OK. The next inspection was with a GoPro camera fitted on a long shaft. It was seaweed around the keel, propeller and rudder. 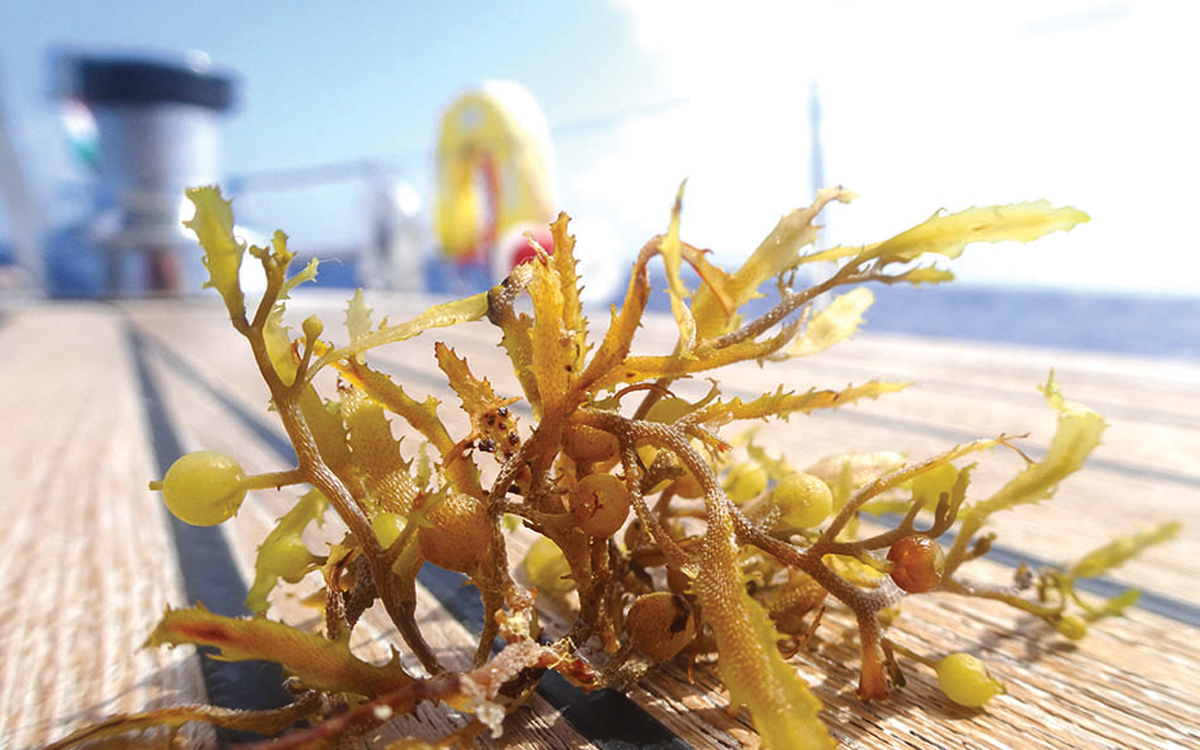 “We took the spinnaker down, turned upwind and let the boat drift backwards to release the seaweed from the boat. We did that seven times during our crossing.”

Others, like Stefan Morjak, turned to the engine to motor astern. “Our manoeuvre was full backward and forward in short intervals and the rudder fast changing from hard port to hard starboard. It’s a torture for engine and rudder but helpful.”

But if you do try to use the engine when it’s tangled with weed, you might make matters worse. “Each time we turned on the engine it made an awful noise. It sounded like the prop was about to fall off,” says Roz Smith, who has just completed a circumnavigation in a refitted Oyster 56. “So bad in fact, that [husband] Rick actually went in to check it was just weed – the only time on the whole trip he had gone into the water while we were at sea.”

Others warned that the weed clogged the through-hull intakes for engines, generators and even watermakers. “There is a lot [of sargassum] washed up here in the Grenadines,” reports Russ Whitehouse after sailing the ARC+ on his Allures 45. “Enough that it blocked our cooling water intake to the generator completely, causing it to shut itself down, thankfully before any damage was caused.”

And weed is equally effective at clogging self-steering gear and the smaller impellers that turn hydrogenerators. Nick Fabbri on his Southerly 38 Ruby Rose says: “We always knew we were in weed because the hydrovane would stop working.”

There have been many reports of Watt & Sea or Duogen units being rendered unusable by the weed. ARC participant Dave Moring reflects: “Charging the batteries with the hydrogenerator [was] not possible. Eventually we had to switch off the fridge and use the windpilot instead of the electric autopilot to reduce energy consumption.” Others reported that resistance from the weed pulled the propeller on their hydrogenerators off. 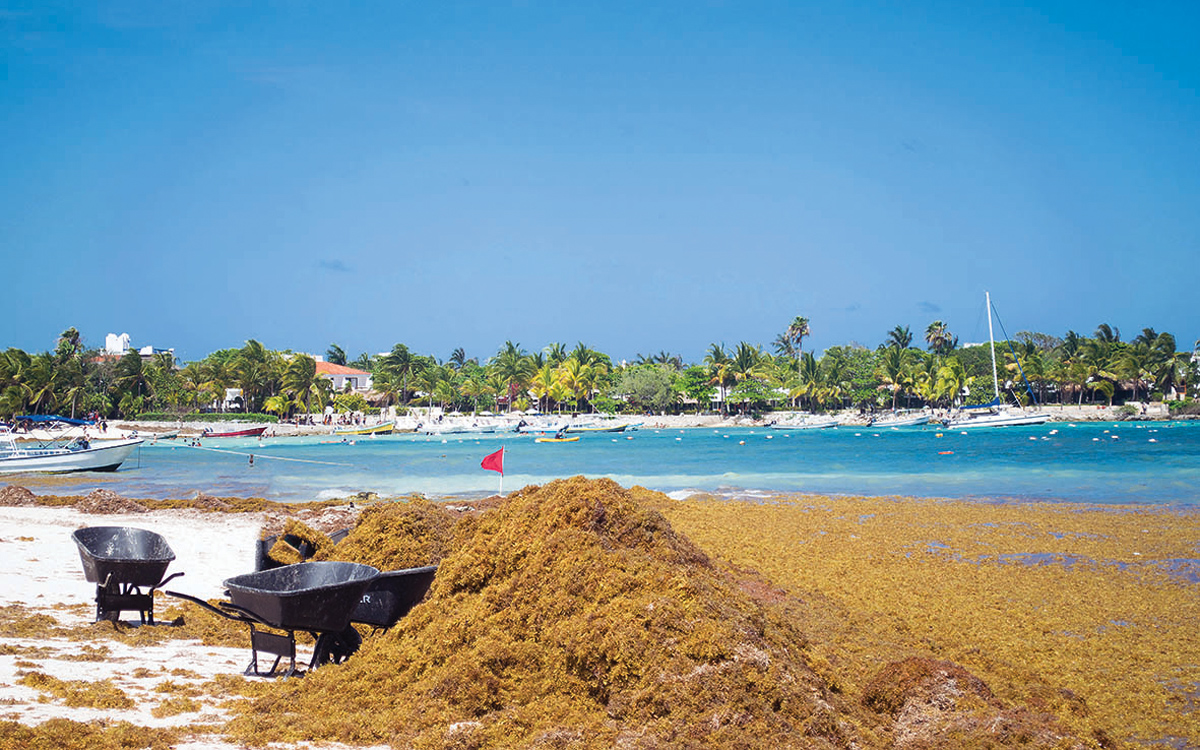 Sargassum weed has been washing up in the Caribbean. Photo: jopstock / Getty

Sargassum also makes fishing impossible. Although sargassum provides a rich and important habitat for small fish, crabs and other marine life, which in turn attracts larger predator species, the oversized mats of weed can also have a detrimental effect, trapping marine creatures like turtles and suffocating coral.

Sargassum has an even more disruptive effect when it makes landfall, clogging beaches, polluting reefs and shutting down tourist infrastructure as it creates an unpleasant eggy smell as it decays. The Caribbean was particularly hard hit in 2018, with top resorts such as the St James’s Club on Antigua closing for three months in the summer. This season, Mexico’s Caribbean coast has suffered badly.

With the economic impact of weed mounting, scientific research has been focussed on providing an explanation for the plague-like proportions of sargassum blooms seen since 2011. A study from the University of South Florida (USF) tracked the growth using NASA satellites. Contrary to that old sailor’s tale about seaweed coming from the Sargasso Sea, they found that the blooms were originating much further south, along the equator. 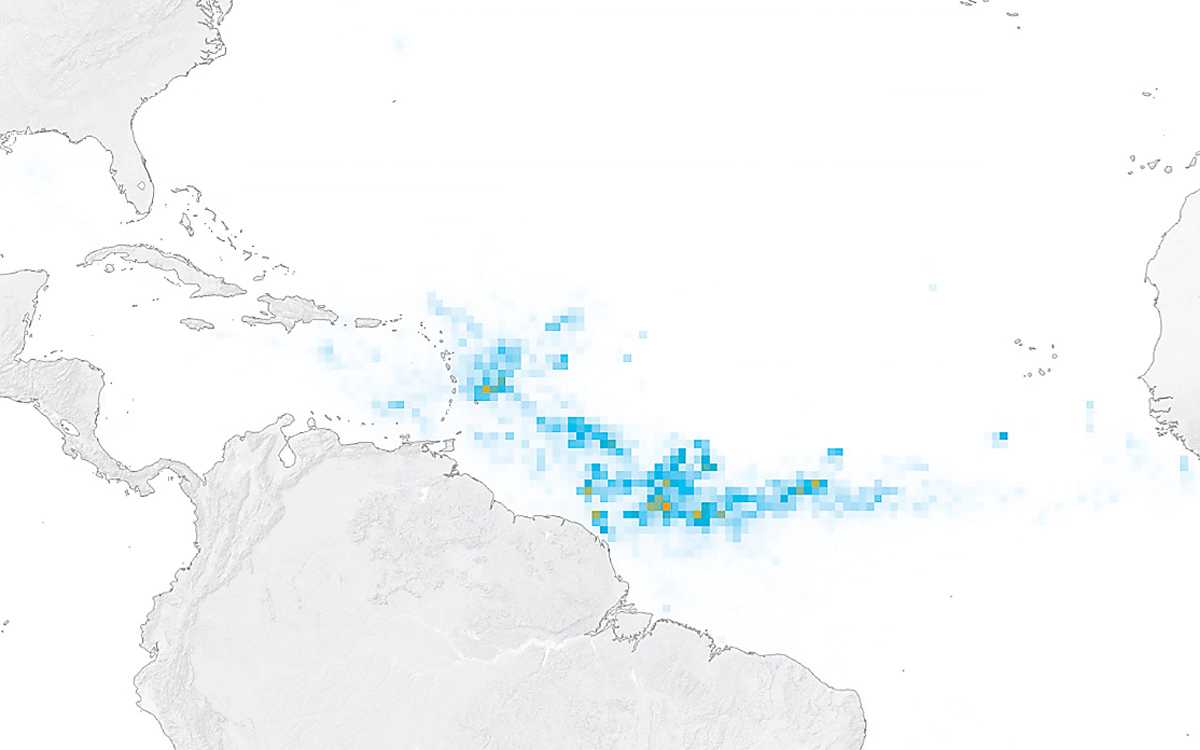 Areas affected by the sargassum bloom in 2011

The USF team believe that new patterns of nutrient enrichment may be the root cause. Some have blamed deforestation in the Amazon and growing use of synthetic fertiliser on either side of the Atlantic for the nutrient spike, but no study has yet confirmed this.

“The ocean’s chemistry must have changed in order for the blooms to get so out of hand,” said Dr Chuanmin Hu of the USF College of Marine Science who led the study.

The peak bloom is normally found in July. Generally, the mats begin to dissipate by the time the trade wind crossing season opens in November, which explains why some sailors encounter no more than the long, straggling streaks of weed that have accompanied mariners for centuries. 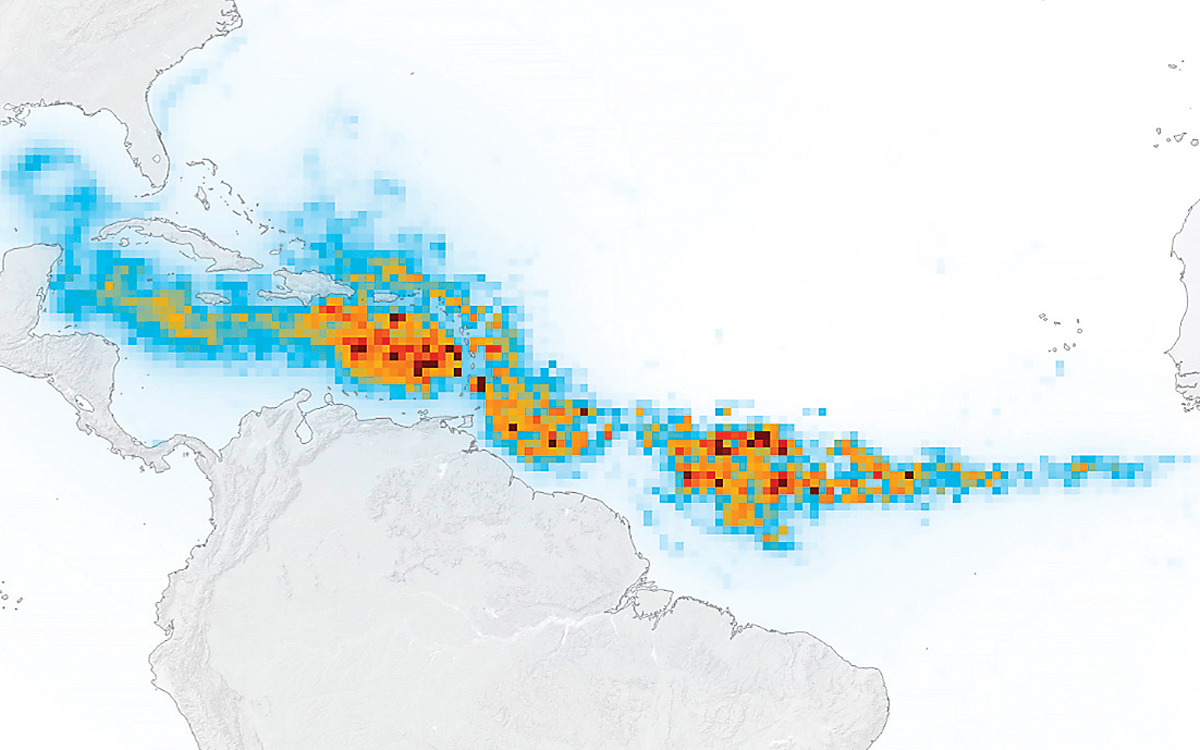 Nonetheless, there is little doubt that sargassum is likely to remain an increasing challenge for sailors. Records suggest that bloom sizes run in two or three year growth cycles, before a poor year for the seed population reduces the weed again. They also show a steady increase in bloom sizes.

The last peak was in July 2018, when satellite data showed an unbroken belt of sargassum stretching from Brazil to Africa and back to the Gulf of Mexico. Estimates put the total weight of biomass at 20m tonnes. And as Dr Hu warns: “Based on the last 20 years of data, I can say that the belt is very likely to be a new normal.” 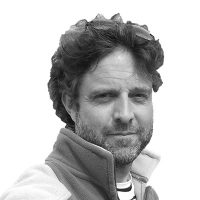 Regular contributor Sam Fortescue is a marine and lifestyle writer who had been working in the yachting journalism sphere for more than 15 years.