We ask top sailors and marine industry gurus to choose the coolest and most innovative yachts of our times. This month Nathan Outteridge nominates the foiling cat used in SailGP, the F50

“Without question the SailGP F50 is the best boat that I have ever sailed. The headline top speeds of over 50 knots are impressive, but there is so much more to these incredible boats.

“The boats are inherently unstable, and so require constant adjustment of the foils to keep them flying at optimum levels. Initially the boats were very hard to sail; the foils are very unstable and not as forgiving as were used in the Bermuda America’s Cup, but with the help of sophisticated computer aided flight controls and user-friendly flight controller hardware the boats are now far easier to sail, which makes for better, closer racing. 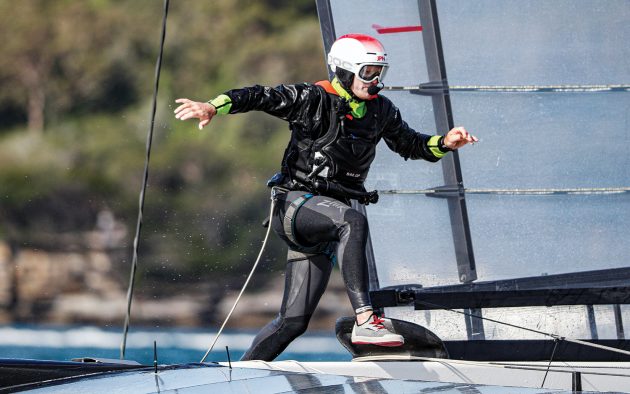 “By having battery power banks on board, the sailors effectively have unlimited power on demand. The boats can be pushed harder and sailed more accurately due to this unlimited power, and as a result the sailors’ skills become more critical and racing becomes more of the focus.

“There are no excuses on these boats.”

Australian Nathan Outteridge is an Olympic Gold Medallist in the 49er and foiling Moth world champion. He helmed for Artemis Racing in the 2013 and 2017 America’s Cups. In 2018 he was involved in the development of the F50 class from the AC50s, and helmed the Japanese SailGP entry in 2019. He is also helming the Japanese entry in 2021’s second season of SailGP. Prior to that he was one of the commentators on the 36th America’s Cup.